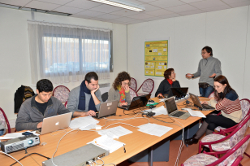 The main scope of these introductory training days organised by Francesco Sottile is to provide attendees with both the theoretical foundations and the knowledge about ab initio calculations, in order to facilitate discussions and collaborations between experimentalists and theoreticians.