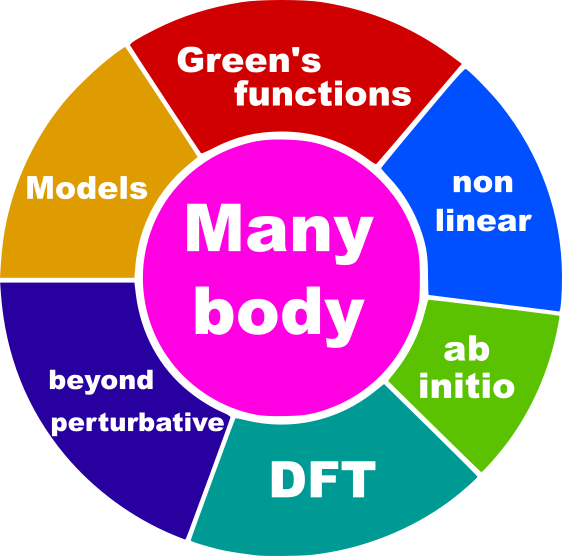 Many-body effects influence electronic spectra in quantitative and often even qualitative ways.
Since our understanding is mainly based on an independent-electron picture, it is a challenge to truly understand, and be able to explain these effects, beyond the raw data produced by computer codes.

Since many-body effects are complicated to understand and cumbersome to compute, many approximations have to be made. In some cases, this completely suppresses interesting physical effects. The main objectives are:

Pushing traditional methods further and further may not always be a winning strategy. For this reason, the group explores completely new ways to deal with certain questions; these new ways may, or may not, lead to breakthrough in practice, but they always lead to new insight.

Real materials are complex, and many-body effects are cumbersome to compute. The group continuously searches for new efficient and reliable approximations.

The group is not specialized in one class of materials, but takes pleasure to investigate and collaborate on changing, challenging problems of real materials. Past or ongoing collaborations therefore span a wide range. This includes companies searching for materials for photovoltaic applications, electric transport, or transparent conducting materials, synchrotrons, or the museum for natural history in Paris. Recent examples for materials-specific results are: