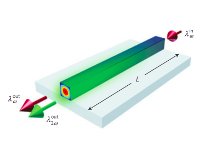 A comprehensive understanding of the optical properties of solids is crucial for the improvement of non-linear materials and devices. It offers the opportunity to search for new materials with very specific properties. One particularly important process is second harmonic generation, where two photons are absorbed by the material and a photon, at twice the energy of the incoming photon, is emitted. This process, due to its sensitivity to the symmetry of the system is often used as a probe for studying surfaces and interfaces, magnetic materials,....
Second harmonic generation is described by second-order susceptibility. This quantity includes the many-body interactions between all the electrons of the system: the variation of the screening on a microscopic scale ("local fields") and the electron-hole interaction (excitonic effects).We have developed a formalism based on the time-dependent density functional theory (TDDFT), which allows the inclusion of these effects.